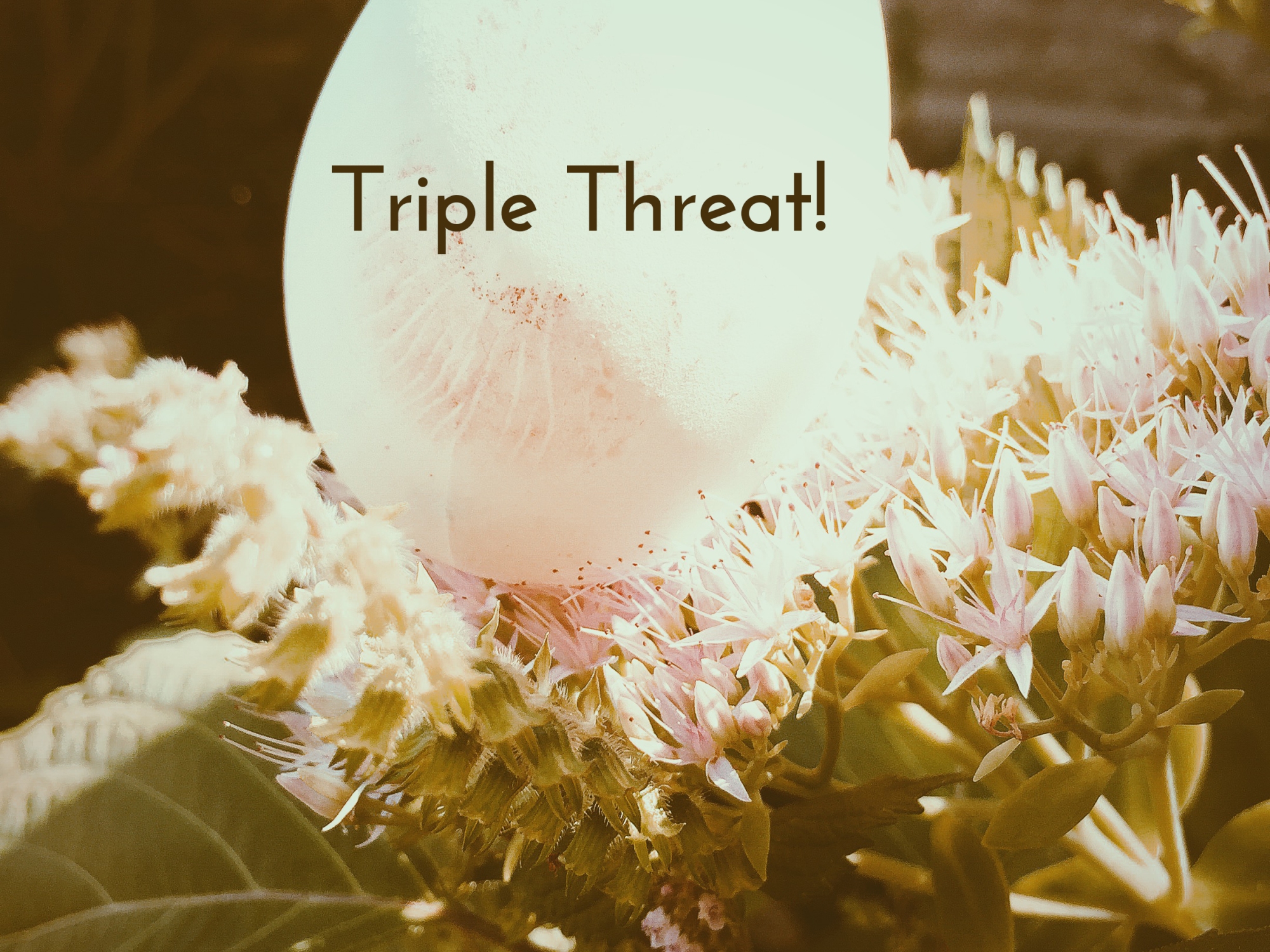 Before we begin as we do at the beginning and end as we do in the end, I’d like to make it clear that this is only a partial review of Triple Threat! : Dance Metro DC’s 2015 Choreographers’ Commission Showcase at Dance Place and that it serves to cover the first half of the show only.

CRADLE
CRADLE is the work of Hayley Cutler, a choreographer who prides herself on the “quirky” and the “darling” and quirk is what CRADLE has. I’ve seen Hayley’s work before, my favorite piece of hers being the trio known as Liberty, which was performed as a third of the Dancing Rogues alongside Sylvana Christopher of Glade Dance Collective and Sara Herrera-Kopetchny of ArasDance.
If you want a celebration of Sass, Quirk and Power, Liberty is where it’s at.

Dialogue
I’ve also seen an earlier incarnation of CRADLE at FIELDWORK, and it is a completely different beast here. A specific dialogue added more depth to the character of each dancer, and as it is slowly unraveled, a story is revealed. It’s a good idea, but on only one viewing, the audience won’t grasp them all. There’s a challenge with infusing narratives as serious as racial tension/understanding with the casual humor of deadpan mad lib-like delivery of “Beyonce“. Saying the N-word amongst otherwise less heavy dialogue is akin to a Slam Poet reciting the most beautiful poem of sweetness and cherry pie, only to conclude with a single swear word. It feels out of place and there is a jerking sensation in the tone. If you want to move mountains, don’t just move one. Moving one mutates “Shock and Awe” to Shock and “..Oh”.  Over the course of an evening this would be easier to balance, but within the confines of half of half a show, it is more jarring and feels out of place. To clarify, it’s not the N-word itself that’s bothersome, just that it comes out of left field and is easily the darkest moment of a piece otherwise made up of quirky quips and gestures ranging from a butt-race to pulling down underwear to “we’re just marking this.” You see, there are three branches of the Audience Manipulation Tree philosophy. We’ll call this the AMT. How far will one go for audience reaction? I don’t recommend traversing any of these branches, all for varying reasons. Personally, I relate Modern Dance to an avant-garde film. You can go far-out space nuts, but going certain places forces reactions, rather than inviting them. You can allow the audience the ticket to emotion, or you can force it upon them. Here enters the tree, which is the “trifecta of try-too-hard-a” in a modern dance stage performance. Swearing out of Context/Character/Tone is one of these.

Humor in modern dance is something that is a delicate thing in and of itself. I feel spoon fed when I hear dialogue in which I can almost picture a rehearsal going something like; “This part right here, the audience will laugh at this part!” CRADLE walks that line a bit too much and it detracts from a serious narrative going on in the background. (I put this one point under a microscope only because it’s one of the few things I could criticize. The talent is there, and choreography is there. I have impossible standards, but only when I care enough to point things out. Both Cutler and Oppenheim are worth seeing and worth seeing twice if you can.)
The dialogue of the second piece of the evening, Woodbind. It Courses by Sarah Beth Oppenheim, really shined to me. I like to see a choreographer go out there and not be afraid to make nonsensical noises while galloping across the whole of the stage. Much a like the person who has attained a true sense of humor is the person who can laugh at themselves, Oppenheim channels a free spirit and the ability to initiate questions without having to go to both extremes to get there. If I have to offer a criticism, I would say the inner-circle bit on calling to the stage hand, by name, was a bit off putting. In-jokes are gimmicks. If Monsieur Thénardier stops halfway through “Master of the House” and asks Billy to ease up on the fog machine, its not appealing. I like that there’s a ladder on the stage, that’s ok. I like that there’s a tech team member interacting with the talent, that’s ok, and these are ok because they can be universal. But the instant you give someone a name, you are alienating your modern dance audience in exchange for an in-the-inner-circle giggle, and that’s not a fair trade. “Lights on, Light off” works. “Annie, can I have some red?” doesn’t work.

Movement
I genuinely applaud Cutler and her star dancer, Jessica Denson for the full frontal in CRADLE. There is little worse than “ok, you can tell I’m naked, but we’re gonna hide it anyways.” Getting naked needs to be a statement and it’s only done right (as in, not “safe nudity” as seen in the Tree) when it’s out there and done like it’s supposed to be nudity. There were apparently discussions of having more dancers be naked, but I don’t think the point would have been made stronger by EVERYONE taking their clothes off. (also, I’ve never seen a naked bow, so there that!) -As previously alluded and beyond the skin, there is a bounty of quirk to be had in CRADLE. Cutler likes to swivel from the hips and launch limbs. You can see skin stretch and the group pile-ons are truly genuine. Although the narrative might be missed, there is definite sense of comradery within the company. There is strength in the physical aspect, though there may also be too much vulnerability in the overall choreography. The piece begins with the dancers “presenting” on their backs, they are all reduced to their underwear and, and while the lines and aforementioned physicality shine, the groundwork is also fragile and subordinate. Getting naked can be badass, but by the time that happens, it feels like the dancers have been thrown around like your missing socks in the spin cycle. If a feeling of oppression is what CRADLE as going for, it succeeded. -But I have to say I wish it also succeeded in giving us a feeling of overcoming that oppression. Getting naked can’t always stand in for shedding your past. There has to be more than that.
Whereas CRADLE had a comradery, Woodbind. It Courses had a sisterhood, and the chemistry of Oppenheim and Kate Folsom will make you believe it. I like to best describe it as Thelma and Louise on a road trip to an unknown ever after. The ending even reminded me of the 1987 film “La Bamba” which portrayed the rise and fall (no pun intended.. sheesh) of Ritchie Valens and also ended with a scream and “Sleep Walk“.

Oppenheim utilizes the entirety of the stage, and while there may have been difficulty here and there with the many, many props, (I’m looking at you, hammer on a rope) both dancers played through it like it was part of the show. There are times when one sister is queen and times when it is the other. They have a bicker here and there, but ultimately, they want the same thing. What that is, I’m not sure. But I would watch Woodbind. It Courses again to find out. There is an especially endearing quality to the choices made by Oppenheim. The best way to describe it is, whether she is galloping across the stage or collecting orange strips, you know what’s about to happen, and yet it is still satisfying when it does happen. You know she’s going to come back to the stage from somewhere else, you know the fan is about to become a campfire, but the fun is in the experience of journey, rather than the destination. There’s hair blowing in the wind, women not afraid to get dirty and gaps in seeing eye to eye that end in compromise.

Music/Costumes/Lighting
I found the sound scores for both pieces good at the time I saw them, but I don’t remember either. There wasn’t anything that stood out to me. I have no complaints, but also, little to add. I hadn’t planned on reviewing this show since I only saw half of it, so I don’t have notes. I now wish I had taken some so I could address this better. I WILL however say that Jessica Denson can sing, and she sings so good that she pretty much takes the spotlight away from the other dancers. Right out of the gate between the “Beyonce” lines and the singing, the audience deviates toward her, and it works in some places, but works against her in others. It turns the piece into “Jessica Denson and the CRADLES, live at Dance Place. Two Nights only!” This also means the other storylines are lessened, which is probably why I couldn’t grasp them. I would normally go more in depth about the costumes and the lighting here, but again, I have to default to this being an impromptu review.

Conclusion
In conclusion, it was a nice evening, and I would really like to see more work by both Sarah Beth Oppenheim, and Hayley Cutler. I think Dance Metro DC chose two great choreographers to showcase here. The pieces complimented each other, and it was fun to see how far CRADLE had evolved from FIELDWORK. I feel I only scratched the surface of Woodbind. It Courses. I wish I could see it again and take notes. On another note, Modern Dance needs more dance reviewers, and bloggers, like you. It’s a community built on and supported by.. itself. Modern is a hard sell because it’s a challenging art that makes you think. Try writing a review of a modern show and you’ll quickly see what I mean! I hope more people give it a chance, and more people review it. DC seems to have a shortage of modern dance support outside of the dancers and former dancers themselves. With that in mind, I say go check out a show. Dance Metro DC is a good place to start.