It’s hard to believe that the ballet world once found shocking the notion of male dancers portraying Swans as viable characters in a narrative, much less as vehicles for redefining dance movements and gestures. Twenty-three years after esteemed Brit Sir Matthew Bourne embarked on his first transformation of a revered classical ballet icon, “Swan Lake” continues to enthrall sold-out audiences on “our” side of the pond. Nor is the idea of male lovers remarkable. It has grown ever more ubiquitous in the performing arts, capitalizing on acceptance of same-sex love as one of contemporary society’s cultural norms.

This gives pathos and intensity to the saga of a beleaguered Prince (James Lovell) who is wooed and betrayed but ultimately saved by a powerful Swan/Stranger (Max Westwell) after an irate mob of the latter character’s male swan-friends kill the Prince in his own bed. The prospect of the Prince’s reunion with the fickle Swan in the afterlife – or perhaps a mere vision of it – magnifies the pain that their coupling has wrought. No single explanation of the narrative suffices or is even clarified in this production, almost as if Bourne wants us to interpret the ending through our own life experiences. It’s a powerful psychological and theatrical device that invites ongoing speculation.

Bourne has accomplished the feat of allowing balletomanes to retain other viewings of a more traditional “Swan Lake” in the memory, especially with regard to elements of the majestic music by Tschaikovsky. At the same time, he introduces dramatic themes that both diverge from the narrative of the original story and employ the music in surprising ways. The Swan becomes the Stranger in street attire (leather pants and jacket) at the Royal Ball in Act Three, initially deceiving the Prince as to his identity.

We don’t miss the 32 fouettés of a female swan character in black tutu or the spiraling grand jetés en tournant by a traditional prince. Rather, we are caught in the intrigue of the Stranger flirting with numerous females at the Ball as the Prince paces around these cursory pairings and then recognizes his lover. Indeed, other than the final moments of the ballet, Bourne’s reworking of the traditional “black swan” sequence constitutes the dramatic and technical high point of his choreography. Westwell utterly excels in the dual role and cements the Swan/Stranger as the central figure of the story – bold and provocative, overpowering (tall and muscular) and unforgettable.

Yet the Prince also distinguishes himself, most notably in two separate soliloquies to music not always heard in traditional productions of “Swan Lake”. The first of these is interrupted by the Girlfriend (Katrina Lyndon). It sparks an emotional duet contemplating themselves in a mirror. The second displays the Prince’s pining for true love with gestures such as outstretched arms and delicate floor rolls.

Several musical cuts or “leaps” from one part of the Tschaikovsky composition to a much later part may jar the purist. Matching the national dances at Bourne’s Royal Ball to the underlying music isn’t necessarily automatic. Two ensembles stand out, however – the Spanish and Slavic – both of which track well with the more traditional renderings.

Less comprehensible for the sake of cogent narrative are some of the minor characters – from the Queen to the Private Secretary, Nobleman and even the Girlfriend – especially as they relate to the two principals. References to the Windsors in the Prologue are unmistakable, as when a toy Corgi (a favorite breed of dog for Queen Elizabeth II) parades back and forth across the stage. A bejeweled crown is displayed in the Prologue once the Prince’s outsize bed swivels around to reveal an equally outsize throne.

In fact, Bourne’s staging is daringly evocative from the opening black-and-white video projections of a swan in flight and intermittent use of more video and scrims (the latter of which first enamored this writer nearly fifty years ago in Washington Opera’s performance of Frederick Delius’ “A Village Romeo and Juliet”). One of my favorite moments transpires in Bourne’s “Swan Lake” clever “stage-within-a-stage” in which four dignitaries ensconced in their box seats off to one side partake of “The Moth Ballet”. Complete with trolls and a fanciful butterfly chaser (first with hatchet, then with net), the “insert” ballet takes place within a gilded frame surrounding a painted outdoor scene with backdrop of a castle, a composite that strongly recalls “La Fille Mal Gardée”. (“Fille” is the oldest classical ballet created in the West.) It’s a welcome contrast to the tragedy about to erupt in Bourne’s production.

On a still lighter side are barroom antics and dalliances. One visually striking sequence utilizes a bright red backdrop to showcase a large ensemble of dancers as silhouettes in black who strut, pose, chunk and dig their way up to the orchestra pit. Scantily clad females ostensibly connected to the unfolding drama of the Prince and the Swan/Stranger appear throughout the production; they mostly provide comic relief.

My verdict on the Swans: totally believable! They definitely look and move like birds. Non-balletic temps levé en attitude derrière, a jump with back leg held loosely aloft in a bent position behind the supporting leg, is executed in a perfectly synchronized series by the Swans. They run in a crouching position, often with hands clasped behind their backs. One arm is angled over the head – hand near the temple with the elbow angled behind. The other arm juts forward and straight. These birdlike gestures are repeated so much that we can imitate them at intermission in the lobby when talking to our friends.

As the fabled pas de quatre, four male Swans trade the traditional emboîtes for an entrance to the City Park of Act Two with stomps and pas de chats (cat steps) capped by jerks of the head. A plethora of temps de flêche (hitch-kicks), turning stag leaps, bison leaps for another quartet as well as the full ensemble of Swans – and a dramatic stag leap in place for the soloist – ensue. The dancers’ technical finesse and bravura fulfill Bourne’s idea of wild, menacing and dangerous Swans. It’s no longer even controversial how they are costumed compared to the days when a few “ruffled feathers” surfaced among balletomanes. Bare chests and billowy, enhanced capri-style white pants deliver convincing images. Debates over the license that Bourne took in creating these powerful characters thus seem antiquated when the ballet is viewed in 2020. 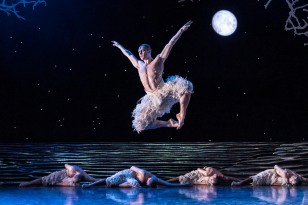 Program notes state that Bourne’s “Swan Lake” has been regularly revived over the last two decades, most recently with new lighting design by the original designer, Lez Brotherston, and much revised choreography. Bourne’s claim to have started out as a virtual novice to ballet has certainly been overcome. As an interesting aside, acceptance via “grueling” auditions to become one of the male swans has become highly prized, especially since some of the current dancers were not yet born at the initial presentation of the 1995 version by Sadler’s Wells!